Curon in the Venosta valley, the drowned village in Resia Lakecuron

Discover your hotels in Curon

Curon in the Venosta valley, a village located at an altitude of 2,452 m in South Tyrol, comprises the hamlets of Melago, Resia, San Valentino alla Muta and Vallelunga. The village is principally known for the Resia Lake with the Romanesque steeple of the former church of St. Christina rising from its waters. The fate of the drowned village is closely linked with the creation of the reservoir, which was laid out directly after the Second World War to produce electricity through hydro-electric power.

The former village of Curon, with its 163 houses and 523 hectares of agricultural land, was situated exactly over the area where nowadays Resia Lake extends. This was a desperate plight for the inhabitants; they even turned to the Pope for help to have the flooding of the region averted. But all their efforts were in vain: The village of Curon in Venosta valley was re-sited further to the north and the old village centre flooded. All that remains of it now is the old church steeple, dating from the 14th century, which was only recently renovated, in order to repair the colossal damage caused by the water. According to legend you can still hear the sound of its bells in dark winter nights. 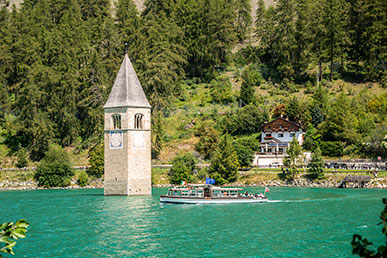 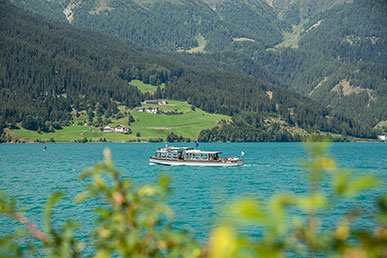