Discover your hotels in Nova Levante and Carezza

Nova Levante is reached via the "Great Dolomite Way", the Strada Statale 48 delle Dolomiti, which winds its way through the splendid scenery of Val d'Ega. The small village has a population of about 2,00 inhabitants and lies at an altitude of 1,182 m on the slope of the highest forested rise in Europe, the "Talt". The Talt is 1,756 m high and can be easily reached from Nova Levante by foot or by mountain-bike. 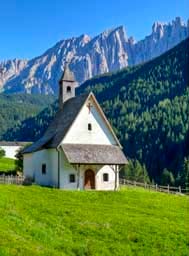 In the mid-12th century the village is mentioned for the first time in documents by the name of "Noue", which means something like new clearing or cleared woodland. The village actually originated from farmsteads, which the farmers from Val di Fassa had built there as time went by, so that they could tend their summer pastures all year round. For the purpose they cleared increasingly large areas of the woods right into the valley. The original inhabitants were of Ladin origin and retained these roots until the 17th century. Their language turned increasingly towards German and gradually the Ladin roots disappeared almost completely.

The municipal district stretches from the village of Nova Levante around Carrezza Lake (1,620 m a.s.l.) to the majestic peaks of the massifs of Catinaccio and Latemar.

A winter holiday in Nova Levante means that you can choose every day between two skiing areas: the Ski Area Carrezza-Karersee with 16 lifts and 40 kilometres of slopes and the Ski Centre Latemar-Obereggen.

Winter sports fans will have fun on the toboggan runs or trying out the various grades of cross-country ski tracks winding through the forest.
In summer a visit to Carrezza Lake is a must. This is the most beautiful mountain lake in the whole of the Alps. It is famous for its placid, deep green water, which is so clear that you can see the peaks of Catinaccio and Latemar reflected in all their glory in it.

The area around Nova Levante offers a huge variety of sports and leisure activities: golf, hiking; mountain biking, paragliding. And at the end of a wonderful day you can take a refreshing dip in the open air swimming pool in Nova Levante.

At sunset a quite special piece of natural theatre begins: at that moment the peaks are diffused with a light, known as alpenglow, and take on the most incredible colours. The realm of King Laurin holds sway once more in wonderful, romantic shades of pink and purple.

Every year in September the traditional König-Laurin-Schupfenwanderung is held. This is an unforgettable hiking experience from Catinaccio to Latemar with various stops at the chalets, known as Schupfen, which are well equipped to care for the bodily welfare of the hikers and to accompany the good mood of their guests with music and games.

On the route in the Latemar Forest you walk through splendid forests of fir trees. It is here that the trees, from which the famous tonewood, used to manufacture violins in Venice, grow.

A few kilometres form Nova Levante lies the Carrezza hamlet, a village with some 100 inhabitants at an altitude of 1,069 m with a panorama over the peaks of Latemar and Catinaccio. The village is known principally for its emerald green lake, but also for its golf course which is wholly set into the idyllic mountain landscape.

From the sunny panorama terrace of the renowned golf club with its club house, driving range, putting and pitching green and practice facilities you can relax completely and take in the matchless picture postcard view.

This almost 3 km long, 9-hole, par 35 golf course is located only 25 km from Bolzano. The course, which is oriented towards the south, was designed by the golf architect, Marco Croze. Previously, on this site there was an 18-hole course, on which the Austrian and English golfing eagles of the early 20th century used to play. It was the custom for them at that time to book into the famous Grand Hotel Carezza for substantial periods and to golf in the healthy mountain air of this natural paradise.

The course is playable from May to November and its special features make it attractive to the most demanding golfers.