Glorenza in the Venosta Valley: the smallest and oldest village in South Tyrol

Discover your hotels in Glorenza

In each corner it offers something special, with its arcades which criss-cross the town and the walls which surround it. This is Glorenza in Venosta valley, a delightful little town, the smallest in Italy (with about 800 inhabitants), which belongs to the Association of the Most Beautiful Villages in Italy ("I Borghi più Belli d’Italia") because of its beauty, its enchantment and characteristic  16th century architecture. First mentioned in documents in 1163, Glorenza has several times been razed to the ground, so that the Emperor Maximilian, so goes the tale, wept in its ruins and resolved to protect it with fortification walls, which are still in existence today to great extent. In the following epochs Glorenza experienced an economic boom, thanks to its place as a trade centre. It became the transhipment point for the salt brought from North Tyrol and destined for Switzerland. In 1919 Glorenza and South Tyrol fell to Italy. Until then it was the court of jurisdiction for Venosta valley. It is not by chance that the oldest and best preserved building in Tyrol is to be found here.

The influence of Fascism was very strong in the region. A military barrier can be seen still today between Malles and Glorenza, which formed part of the Alpine Wall in South Tyrol. It was a fortification, consisting of bunkers and anti-tank trenches, which served as a bulwark against Nazi Germany during Second World War. Mussolini had this defensive system built from fear of an attack by the National Socialists led by Hitler, although he had just signed the Pact of Steel with him. After the annexation of neighbouring Austria the German government, which was increasingly telling the Italian government less about its military intentions, could easily have marched into the Italian Alps. Great was the grief of the South Tyrolean people, who became the victims of this and were often dispossessed of stretches of agricultural land. To commemorate this, every year in July, August and September the Passo di Resia region nowadays organises guided tours of Bunker 20, which is located at the source of Adige River. 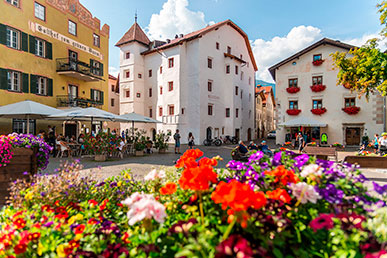 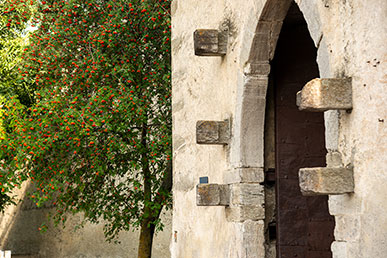 The fascination of the little town of Glorenza, with its houses and picturesque 13th century arcades, is not in the slightest reduced. These, as in the majority of other South Tyrolean towns and villages, have experienced a rising of ground level necessitated by the numerous floods. Therefore we should not be surprised if we see the occasional cow wandering around the streets of the historic centre. The agricultural imprint is closely linked with livestock-rearing and agriculture and these are a link between a modern lifestyle and the activities of past ages. The inner courtyards, patrician houses and buildings with Gothic facades complete the architectural spectrum of Glorenza. The parish church of St. Pancras and St. Jacob's Church in Söles are also worth visiting.