Mediterranean flair mingles with traditional Tyrolean atmosphere, palms and cypresses grow between grape vines and apple trees, gentle meadows and valleys are framed by sheer walls of rock: that is South Tyrol's South, one of the most popular holiday regions in the country. 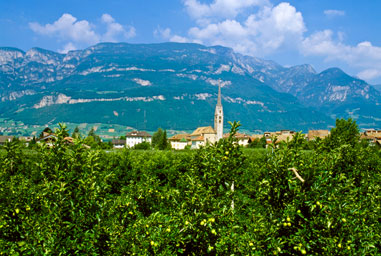 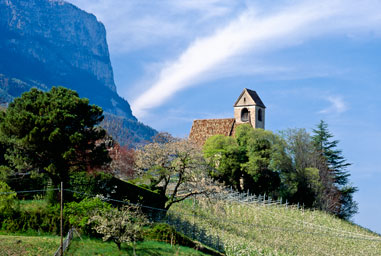 South Tyrol's South is divided into Oltradige and Bassa Atesina. Oltradige includes the villages of Meltina, Terlano, Andriano, Appiano and Caldaro. The landscape is dominated by the Costiera della Mendola and Caldaro Lake, the warmest lake in the Alps. A distinctive feature are the many castles on slopes above the valley.

Bassa Atesina is made up of the villages of Cortaccia, Termeno, Aldino, Ora, Cortina, Magrè, Montagna, Egna, Trodena and Salorno. The summits of Corno Nero and Corno Bianca, set in the luscious vegetation of the Monte Corno Natural Park, dominate the landscape. A distinctive geographical feature of the area is the Bletterbach gorge, whose exposed rock strata give an insight into how the Dolomites were formed.

However, it is the extensive vineyard and orchards, which are the distinctive feature of South Tyrol's South. The cultivation of fruit and grapes for wine is of high importance in the region. The villages of Appiano and Caldaro are the two largest wine-growing villages in South Tyrol. Here, on more than 1700 hectares grows a huge selection of grape varieties, such as Lagrein, Vernatsch, Pinot Noir and Sauvignon. But Bassa Atesina too can offer a rich choice with Gewürztraminer, Chardonnay, Cabernet and Merlot. The mild climate, the sun-kissed slopes, porphyry-retentive soil and loving care are the reasons for the abundance and high quality of the wines on offer. The wine is not only a common feature of Oltradige and Bassa Atesina, but also links the places to each other via the famous South Tyrolean Wine Road. This goes from Terlano through the whole Val d’Adige valley to Salorno.

A further feature of this splendid holiday region are the original villages with their old manors, winding alleys and pretty churches. A medieval ruined castle, inviting the visitor to explore, towers over almost all of the villages. Salorno Castle above Salorno, Castelchiaro above Caldaro Lake and Castel d'Appiano castle are among the most attractive and well-known. Appiano on the Wine Road is deemed to be without doubt the village with the greatest number of castles in the whole South Tyrol.

The wonderful natural setting in this unique environment offers an endless variety of hiking and cycle tracks, from which you can discover the most beautiful places. The most popular excursion destinations in South Tyrol's South include the Monticolo Lake Nature Reserve with its idyllic bathing lakes, the Biotope Castelfeder with its Mediterranean vegetation, the Passo della Mendola as the "home mountain" of Caldaro, the Valle di Primavera (Spring Valley) between Monticolo and Caldaro Lake and the Favogna above the village of Magrè. Both in summer and in winter all these places offer a wealth of opportunities for the most varied leisure activities and make South Tyrol's South one of the most versatile holiday regions in South Tyrol.