Discover your hotels in Bolzano

Bolzano, the city of thousands of faces and thousands of cultures, capital of a small, yet big region. Innovative, yet traditional, modern, yet industrialised, but always with respect for ancient customs and traditions. Bolzano is located in a valley basin where the Isarco Valley, the Sarentino Valley and the Adige Valley meet. This area has always been regarded as a border between Italy and the German countries. It is not for no reason that Bolzano is also called the "Door to the Dolomites". The Mendorla mountain chain, the high-alpine plateau Saltusio and Renon and Putzen are the most renowned peaks surrounding the city, Talfera, Isarco and Adige, are the most important rivers crossing the city. Varied landscapes, which are all present in a small city (compared to other Italian cities), a city with only 100,000 inhabitants.

The city of Bolzano is located at 265 m above sea level and dates back to prehistoric origins, even if the old town dates back to the 12th century A.D. Since antiquity, the city of Bolzano has been a meeting place where culture and trade exchange have always promoted the successful cooperation between German and Italian tradesmen. The growth and development of the city is due to its advantageous position. The city was a popular destination even for the first traders and markets in medieval times.

During its growth and over the course of the centuries, Bolzano was soon able to distinguish itself from an architectonic and urbanistic point of view. The city developed into one of the best organised and best structured cities, not only in South Tyrol, but in the whole of Italy. Baroque, rococo, late gothic, late Romanesque and other shapes reminding of Art Nouveau are only some of the architectonic styles you'll find everywhere in the city. Furthermore, the strong influence of fascism, with the "Victory Memorial" as its symbol, made Bolzano a very unique city.

Eventhough many people consider Bolzano the coldest city in Italy, in reality very high temperatures are reached during summer. The geographic position amidst mountains, the dry climate, the rare cases of fog and haze are the reason for the early and long summers in the city. Bolzano offers plenty of options for leisure time activities. The cycling paths, that lead through the city, the swimming pools, the sports pitches, the hiking paths, and the culture saloon in the historic city centre attract numerous tourists every year.

Walter Square, Erbe Square, Vittoria Square, Laugengasse Lane, the Franciscan Church, the Dome Maria Assunta, all types of art, and the Talfer meadows, which are so big that it seems they want to enter the old town, are ideal for cooling down and offer quietness for all those who want to enjoy a nice walk at weekends or after work.

Hence, Bolzano welcomes tourists from all over the world, and the popular saying "Four inhabitants from Bolzano, five tables", which describes South Tyrol's capital as being closed with a lack of hospitality, can definitely be refuted. In reality, the various ethnic groups, the various languages, and the different religions describe one of the most successful melting pots in Italy.

Explore the high resolution panoramic picture, zoom in and discover all the details with your mouse.
Click on the picture to start! 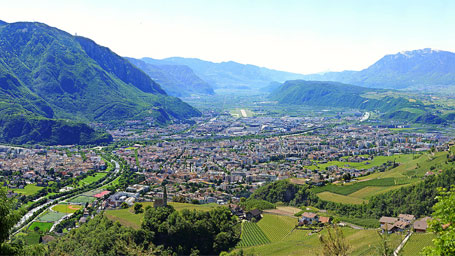 VinoCulti, the pleasure of wine in Tirolo

Keschtnriggl – It’s all about the chestnut

Christmas Markets 2022 in South Tyrol
Free rooms!
SEND YOUR REQUEST
and find out
your lodge!