The name of this inimitable paradise comes from an abbreviation of the Ladin name, "cresta de Lac-te-mara", which means something like "the mountain crest above the lake in Kar". Its present name has been documented as long ago as the 12th century.

The Latemar forms part of the Dolomites and is characterised by imposing, steep cliff faces contrasting with quaint chalets. The massif is shaped like a horseshoe opening towards the east and is formed for the most part from sedimentary rock with typical stratifications. There are also sites where you can find fossilised corals; these date from the Triassic, when this area was still part of the sea floor. Indentations, up to 200 m deep in the cliff, at the bottom of which can be found lava rock, also indicate that this area was originally volcanic. 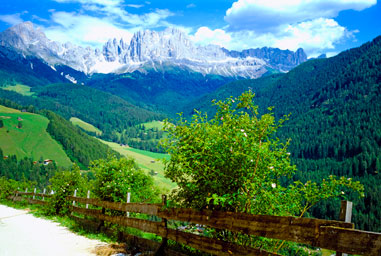 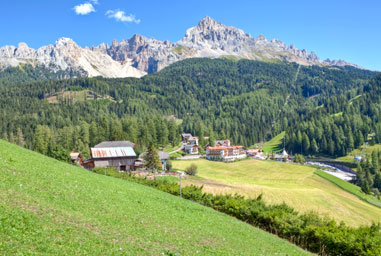 The highest peak in the Latemar region is the Diamantiditurm (2,842 m), named after the Viennese mountaineer Demeter Diamantidi, who made the ascent up a dangerous cliff face. The very first successful ascent to the summit, however, was achieved by the German, Gustav Euringer on 17th August 1885.

The other towers of the Latemar Group are usually simply called the "Westtürme (Western Towers)" or the "Latemarpuppen" (Latemar Dolls). On their northern face they rise impregnable and awe-inspiring, but from the southern side they are easier to climb.

The Catinaccio extends along a length of 8 km and since 2003 has formed part of the Massiccio dello Sciliar-Catinaccio Nature Reserve. West of this group lie the valleys Valle di Tires, the Val d'Ega and Nova Levante and to the east Val di Fassa. In the north we find the Massiccio dello Sciliar and in the south the Passo di Costalunga. This mountain chain, called Catinaccio in Italian, is called Rosengarten (Rose Garden) in German because its unusual configuration means that it is bathed in a deep rose pink at sunrise and sunset. Legend relates that this was the realm of the famous King Laurin.

At 3,004 m, the Catinaccio d'Antermoia is the highest peak in the Catinaccio. The Englishmen C. Comyn Tucker and T.H. Carson, with A. Bernard as their mountain guide, made the first successful ascent in 1873. When you consider the sort of equipment used by mountaineers at that time, this was without doubt a sensational undertaking.
Once he has reached the summit, the mountaineer is rewarded by a breath-taking view, which is among the most impressive in the whole of the Dolomites.

The Cima Catinaccio is, of course, the most well-known summit of the group and thanks to its imposing shape is definitely one of the most magnificent sights in the Dolomites. The 2,981 m high peak was first climbed on 31st August 1874 by the Englishmen, C. Comyn Tucker and T.H. Carson with the mountain guide, François Devouassoud

The Vajolet Towers or Torri del Vajolet, which are bordered on the north by the Valojet Pass (2,459 m) and in the south by the Laurin Pass (2,627 m), are a bizarre cliff formation in the centre of the Catinaccio. In summer this is very popular with rock-climbers.

The sight of the majestic Towers is simply breath-taking and it is almost impossible to tear yourself away from the unusual atmosphere of rest and peace which radiates from it.